Check out our latest news stories to learn about the accomplishments of our employees, research and development efforts, how we invest in the local community and much more!

If you’re a member of the media who needs more information, please contact us.

KCNSC employee Aaron Norris recently made headlines when he gifted his work to the Negro Leagues Baseball Museum. Using his talents to honor a Kansas City sports legend, Norris donated an original portrait of baseball Hall of Famer Satchel Paige to the museum in a ceremony in May in downtown Kansas City.

Norris has been painting since middle school and developed his skills mostly by working with landscape pieces early in his art career. He recently began creating portraits of many Kansas City sports figures, including a handful of pieces of Kansas City Chiefs’ Quarterback Patrick Mahomes.

“Over the last few years, I've really started to evolve from primarily a landscape artist to a sports and figure artist,” Norris explained. “In the process, I've been really interested in capturing Kansas City sports legends, from George Brett and Bo Jackson, to Len Dawson and Derrick Thomas. Recently, I became interested in painting even older legends like Buck O'Neal and Satchel Paige, because of their lasting impact on Kansas City and the sports world in general.”

A member of the National Baseball Hall of Fame, Paige was a pitcher whose skills on the mound became legendary during his many years in the Negro Leagues, where he spent several seasons with the Kansas City Monarchs and eventually the Kansas City Athletics. He is ranked as one of the greatest players in the history of baseball and was one of the first players to break the color barrier in major league baseball.

Norris was initially contacted by Bob Kendrick, the President of the Negro Leagues Museum, who told him how much he liked his paintings, in particular the Satchel Paige piece.

“He said it was a perfect representation of [Satchel] and that he would love to see it in person,” Norris said of his conversation with Kendrick. “It was a mutual friend who approached me about the idea of donating it. I was thrilled with the idea of my work being displayed in such a one-of-a-kind setting, so I jumped on the opportunity and we made it happen.”

A small ceremony was held at the site of old Municipal Stadium in May, 2022, where Norris officially handed over the piece. Municipal Stadium stood at the corner of Brooklyn Ave. and E. 22nd Street from 1923-76 and hosted Kansas City professional teams such as the Monarchs, Athletics, Royals and Chiefs, as well as a Beatles concert in 1964.

Unveiling ceremony attendees included Kendrick, Kansas City Mayor Quinton Lucas, as well as Kansas City Royals Hall of Famers Frank White, current Jackson Co. Executive, and former baseball player and KC Royals hall of famer, John Mayberry. Each gave brief speeches and told stories about their memories of Municipal Stadium. Aaron was then asked to come up and unveil the painting, which he says was a remarkable honor.

Norris has donated several pieces to various charities around the city, but this was the first piece that he donated to the Negro Leagues Museum. He says touring the museum gave him many more ideas, and he plans to create more pieces for them in the future.

To see more of Aaron’s work, visit his website at https://www.aaronnorrisstudio.com, 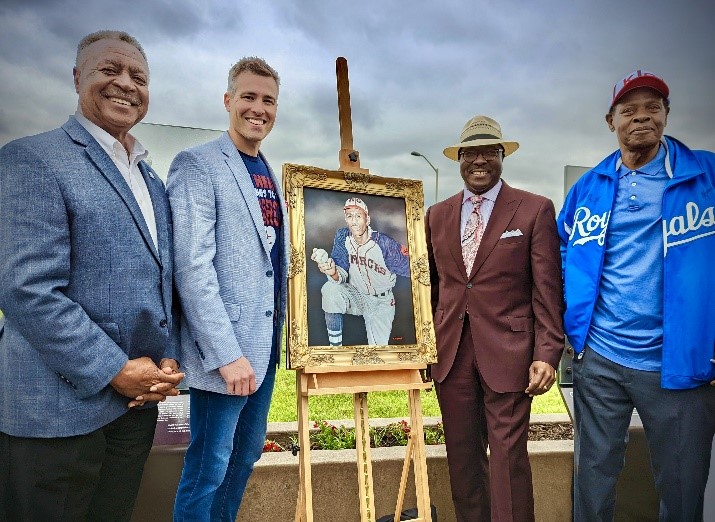 © 2015—2021 Honeywell Federal Manufacturing & Technologies, LLC, pursuant to Prime Contract DE-NA0002839
The U.S. Department of Energy is committed to making its electronic and information technologies accessible to individuals with disabilities in accordance with Section 508 of the Rehabilitation Act (29 U.S.C. 794d), as amended in 1998. Send feedback or concerns related to the accessibility of this website to DOE Section 508 Coordinator mailbox.